Welcome to the New Year! Hopefully you saw a successful 2018 and are ready to tackle some business goals for 2019! How do you know that the campaigns you are running are successful? How can you use this year's data to plan for 2019? How will you deploy your 2019 ad budget? Where do you increase budgets and which campaigns do you automate? What keywords do you allocate ad spend on? This four-part blog series will illustrate a data-oriented solution to initiate 2019 campaigns - using the data accrued through Reviewbox services.

A Look Back at Amazon Advertising

Before we get started, we need to recap some of the big changes we saw in 2018 in how Amazon approached its advertising business. Amazon announced in September 2018 that it was consolidating its advertising departments into one unit, dubbed Amazon Advertising. What sparked this transition? According to Digiday, Amazon consolidated services to make the ad buying process more usable and automated.

Of course, also in 2018, Amazon emerged as a contender against Google and Facebook when it was announced in September that Amazon now holds the #3 spot in ad revenues behind the two media giants. Amazon has its eye on those ad dollars and by creating a more user friendly platform, will help increase ad spend on their site.

In addition to merging ad services to one platform, Amazon increased the amount of page real estate that went into Sponsored Brands (formerly Headline Search Ads), in turn decreasing the amount of real estate for organic search results. Another notable change is the increase in Amazon's own private label brands that compete for advertising space. Take a look at this example from Recode: 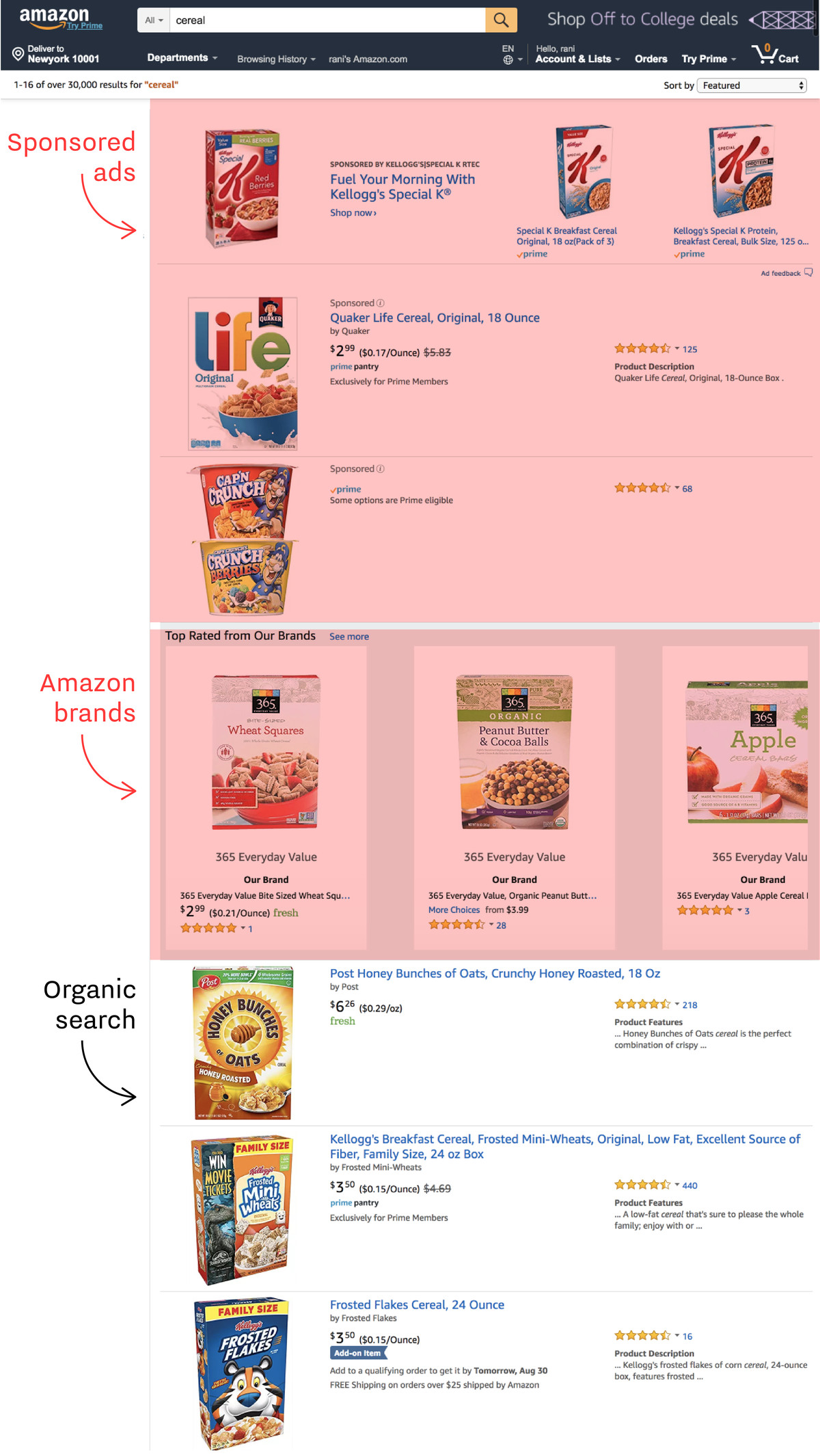 Amazon will continue to focus on advertising in 2019, and many advertisers plan to increase ad spend on the Amazon platform. The increased budgets are being pulled from traditional advertising sources such as print, tv, or in-store promotions. Others plan to increase Amazon Advertising dollars while decreasing budgets for Google search or Facebook Ads and some agencies are predicting an increase of display/video ads on the product pages.

In an effort to streamline services, it is rumored that Amazon will be combining Seller Central (3p) and Vendor Central (1p) with a system called "One Vendor". While this hasn't been confirmed by Amazon, we have seen the company merge the retail and third party marketplace under the leadership of a new SVP, Doug Herrington. In a statement to CNBC, Amazon confirmed that they had been working for some time on standardizing the products, tools and services offered to the brands and resellers that sell on the site.

Finally, a report by AdAge states that "Amazon is making bold new moves into self-serve programmatic advertising. It plans to spend the next year aggressively expanding the infrastructure that it hopes will get more brands buying ad space on its websites and through its ad platform, according to people familiar with the matter."

This doesn't even cover the predictions that are swarming the internet regarding Amazon opening up sponsored ads on FireTV and Amazon Echo. Do you have any predictions for Amazon in 2019? What features would you love to see the company offer vendors in terms of advertising?

Stay tuned for the next part of our series on Amazon Advertising: How to Turn This Year's Data into this Year's Roadmap.